MUSKEGON – The Oakridge football team had its Week 2 matchup with Muskegon Catholic circled on its calendar.

The Eagles lost a heartbreaker to MCC last season in the final seconds of the game and were looking to get payback on the road.

They ended up getting their revenge in another close one. Oakridge took a 13-point lead early in the fourth quarter, then held on to beat the Crusaders 20-14 at MCC’s Kehren Stadium.

“I mentioned to the team this week that they (Muskegon Catholic) were one of the teams that we have a losing record to,” said Oakridge coach Cary Harger. “We wanted to even the score with them and it’s special to do it here since they got us at our place last year.”

The Eagles wanted to keep Muskegon Catholic quarterback Bryan Convertini from making big plays, and did so through most of the contest, holding multiple MCC rushes to less than five yards.

“We did not want to let him get away with the run game,” Harger said. “We knew that they wanted to put the ball in (Convertini’s) hands a lot, and I think we did a good job getting to him at certain times.”

The Eagles jumped out to a quick 8-0 lead, scoring on a two-yard touchdown pass from quarterback Matt Danicek to Trever Jones with 6:55 left in the first quarter.

The Crusaders almost scored on the next possession, but Danicek put an end to the drive by intercepting a pass in the end zone.

Oakridge then continued its early offensive tear, marching 80 yards down the field on five plays. Jones found a big hole up the middle and ran for a 48-yard touchdown to increase the Eagles’ lead to 14-0 on the second play of the second quarter.

Muskegon Catholic finally got on the board after recovering a fumble on the Eagles’ 46-yard line. The Crusaders scored six plays later, with 6:16 remaining in the second quarter, on a five-yard touchdown run by Chase Willer to cut their halftime deficit to 14-7.

Both teams struggled to put more points on the board after that, combining to punt the ball on the next six possessions.

The Crusaders had a couple chances to score early in the third quarter, but a holding call negated a 59-yard run, then a false start penalty wiped out a 53-yard touchdown pass.

Oakridge finally ended the scoring drought with 5:03 left in the game on a 22-yard touchdown pass from Danicek to Evan Miller.

The Eagles failed to convert on the two-point conversion, leaving the score 20-7.

Oakridge forced a turnover on the Crusaders’ next possession with an interception by Brody Jennings, but the Eagles were quickly forced to punt the ball back with time left on the clock.

The Crusaders drove the ball 80 yards on six plays and managed to get into the end zone on a three-yard touchdown run by Convertini with 1:06 left in the game.

Muskegon Catholic attempted to get the ball back with an onside kick, but the Eagles recovered and converted the game-winning first down on a third-and-3 play with less than 10 seconds remaining.

Danicek paced the Eagles offensively, going 11-for-17 passing for 93 yards and two touchdowns while also rushing for 49 yards on nine carries.

The Crusaders were led offensively by Convertini, who threw for 126 yards on 6-for-13 passing and rushed for 81 yards on 20 carries and a touchdown.

Willer and David Hill each caught three passes for 59 and 67 yards, respectively.

Easten Cook led the defense with eight tackles while Sam Kartes had seven.

The Eagles, now 2-0 on the season, will face Manistee next week in their conference opener.

Muskegon Catholic, 1-1, will look to bounce back next week against Benton Harbor. 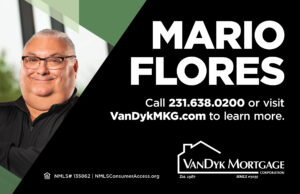