Kyle Stratton inspired by the tears he shed as a youngster, watching his beloved Whitehall Vikings fall short in playoff games

Stratton, a standout junior quarterback, will try to lead Whitehall to its first regional championship in history on Friday in a clash with GR South Christian

WHITEHALL – Having a deep, long-term love for a team can really drive a young athlete to become something special.

As the son of longtime Whitehall assistant coach Keith Stratton, Kyle grew up hanging around Viking practices, watching the games with the players on the sidelines, and passionately rooting for the team through good years and bad.

He dreamed of the season when his beloved Vikings would make finally make a long run in the state playoffs, and maybe – just maybe – advance all the way to the state finals at Detroit’s Ford Field. And he always ended up with his heart broken when the last game ended every year.

While Whitehall has been very good in recent years, the playoffs have remained a point of frustration.

Whitehall advanced to the regional finals back in 2014 against Grand Rapids South Christian, but lost 49-14.

Stratton remembers being shattered by that outcome, and all the other playoff disappointments, as well.

“It was rough,” he said. “I’ve been on the sideline since I was six. I remember every playoff loss and a cried after every single one. Back then the varsity guys were like NFL players to me.

“I really remember in 2014 when we lost to South Christian. I remember walking off the field crying. I couldn’t wait for my shot.”

Stratton will get that shot on Friday, when his undefeated Vikings, ranked No. 1 in the state, will face off against undefeated South Christian, No. 2 in the state, in a Division 4 regional championship game at East Kentwood High School.

The winner will earn a berth in the state semifinals.

Stratton admits he’s a little nervous about the showdown, but also confident and excited at the same time.

“They’re a great football team, but I feel like we can play with anybody,” Stratton said. “It’s No. 1 vs. No. 2. We haven’t had a huge game like this one before. I think it will come down to which team makes the least mistakes.”

There’s no doubt that South Christian is a little nervous about Whitehall as well, particularly Stratton, after the amazing season he’s had.

Last year he broke in as a starting sophomore quarterback and had a great season, particularly through the air, completing 48 of 89 passes for 881 yards with 13 touchdowns and only three interceptions.

But what he’s done this year as a junior easily eclipses that.

In the regular season he completed 66 of 101 passes for 1,233 yards, with 21 touchdown throws and six interceptions. He also became a very dangerous runner, gaining 752 yards on 81 carries and 15 more touchdowns.

He’s a had a lot of really, really big games this season.

In the season opener against Hudsonville Unity Christian, he passed for 222 yards and three touchdowns, rushed for 101 yards and one TD, and returned an interception for a touchdown.

Against Alpena he passed for 197 yards and four touchdowns and ran for 114 yards and another touchdown.

Against Oakridge he rushed for 187 yards and one touchdown and passed for 93 yards and three more TDs.

Against archrival Montague, he rushed for 165 yards, passed for 149 and had a hand in five touchdowns.

Those are just a few of many examples. Most kids would be thrilled to have one game like that in an entire career, and Stratton does it pretty much every week.

Stratton has piloted a Whitehall offense that seemingly scores at will. The Vikings have piled up 509 points through 11 games   and have scored at least 41 points every single week.

There’s a lot of talent on the Viking offense, but Stratton is clearly the biggest threat and the guy who makes it all work.

“Yes,” said Whitehall head coach Tony Sigmon, when asked if he expected Stratton to have such a big year as a junior. “We saw the potential with him a long time ago.

“This kind of kid only comes along once in a great while, the type that has those certain qualities, in terms of charisma, wanting to do it, and having the work ethic and the talent. To have someone with all of those qualities is a real find. There was a reason we went ahead and started him as a sophomore.

“He was first-team All-Conference as a sophomore, and he followed that up by doubling up just about every one of his statistics this year.  And the first thing he always does is deflect the credit to his teammates. He talks about his line and the other skill kids and all of the guys.

“Confidence has been his biggest thing this year. He’s gained a lot through his work in the weight room, playing other sports, just basically doing everything that you hope a high school kid will do to progress.”

Stratton agrees with Sigmon’s assessment about his increased confidence this fall.

“That comes from the coaches giving me more leeway this year to do my thing, and from my teammates because I know they always have my back,” he said. “It’s been a great feeling putting up the points that we have this year.”

Stratton and the Viking offense really showed what they are made of last Friday in a district championship game in rainy conditions against a very good Fruitport team.

The Trojans scored the first touchdown of the game and the Vikings lost fumbles on their first two possessions. Another team might have panicked at that point and struggled to get back in gear, but Whitehall did not.

The Vikings pulled themselves together and rolled to a convincing 51-26 victory and earned their first district title since 2014.

“Even when we fumbled on our first two possessions, we were like, ‘We’re good, we got this,’” said Stratton, who passed for 145 yards and one touchdown in the game and ran for 127 yards and three scores. “We knew we were going to drive down the field.

“Our line just stuck it to them, driving them off the ball every play. Jackson Cook had a great game and Nate Bolley had his best game of the season. We’re able to switch things up and still succeed. We can pass for a big play when we have to, and we can run for big plays, too.”

Stratton said he and his teammates have been waiting for their big playoff opportunity for years, and always felt like 2022 would be their season, with 18 seniors on the squad and lots of talented skill position players.

“I think the biggest thing for us is how close we are,” Stratton said. “There is a brotherhood on our team. We never get down on each other, and we’re always picking each other up. That’s gotten us a long way. 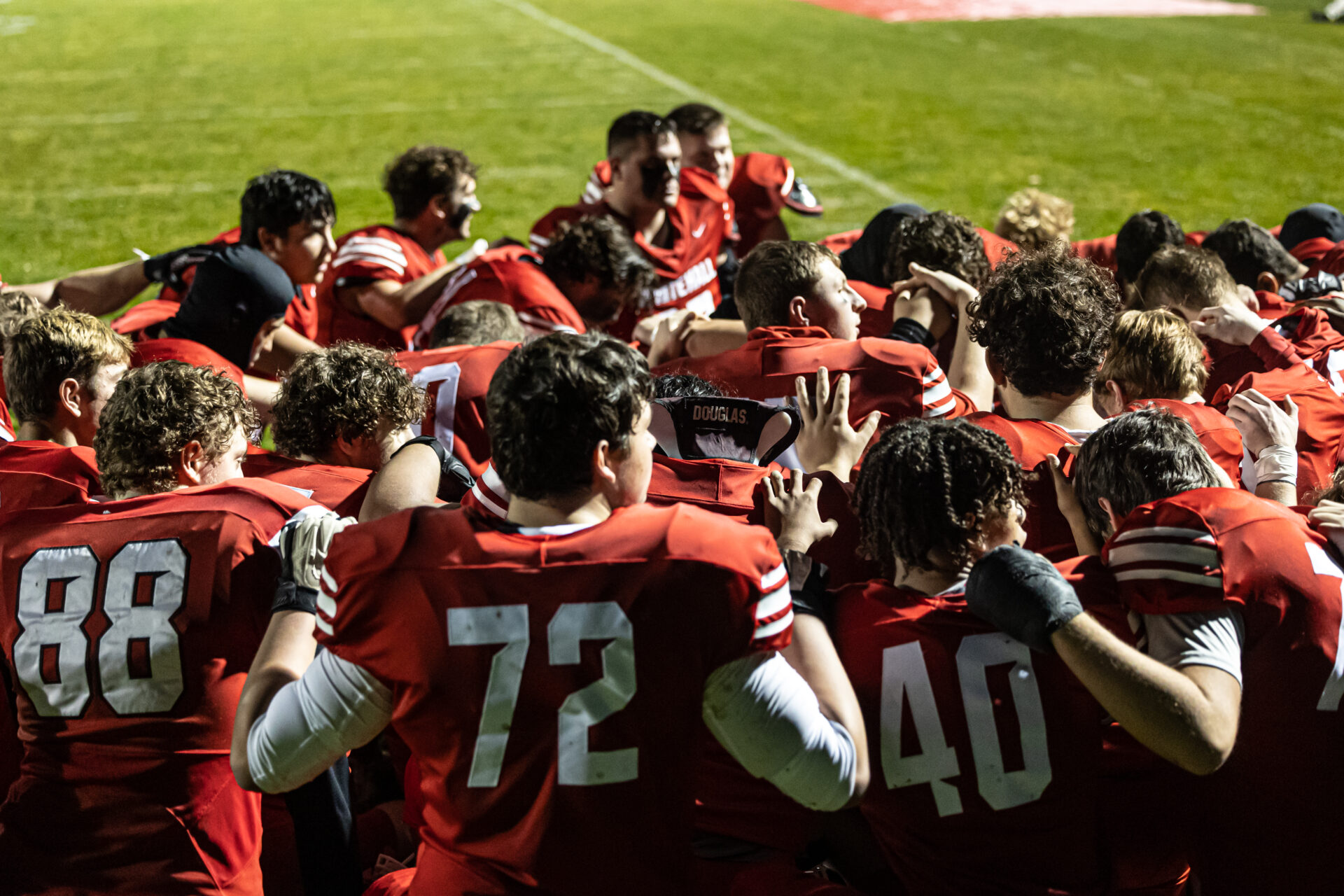 “Every single game, every single day, I think we’ve all dreamed about making it all the way to Ford Field. We’re finally at this point, and hopefully we will be making all of our dreams a reality.”

The first order of business, of course, is beating South Christian on Friday in the regional finals, then focusing on the next challenge if the Vikings win.

This week’s game may have a state championship atmosphere, but Whitehall would still have to win again next week to reach the Ford Field.

Stratton, who has seen too much playoff disappointment in his life, is keenly aware of that.

“No Whitehall team has ever won a regional championship, and it would be a huge thing, but even if we get that we will look toward the next one,” he said. “We are all about one game at a time, one practice at a time. We never look too far forward.