Connor Forman scored the game-winning goal for the Sailors, who have all but wrapped up the regular season O-K Green conference championship

MUSKEGON TOWNSHIP – It’s one thing for a team to win a lot of games.

It’s quite another to keep winning the close ones, particularly when you’re in first place with a big target on your back.

The Mona Shores boys soccer team has done that twice in less than a week, and is now only one victory away from clinching the regular season O-K Green conference championship.

Last week the Sailors were pushed hard by Zeeland East in a battle for first place and emerged with an exciting 1-0 victory.

On Tuesday they were pushed again by a talented Reeths-Puffer squad that has underachieved this season and managed to escape the Rockets’ home field with a thrilling 2-1 win. 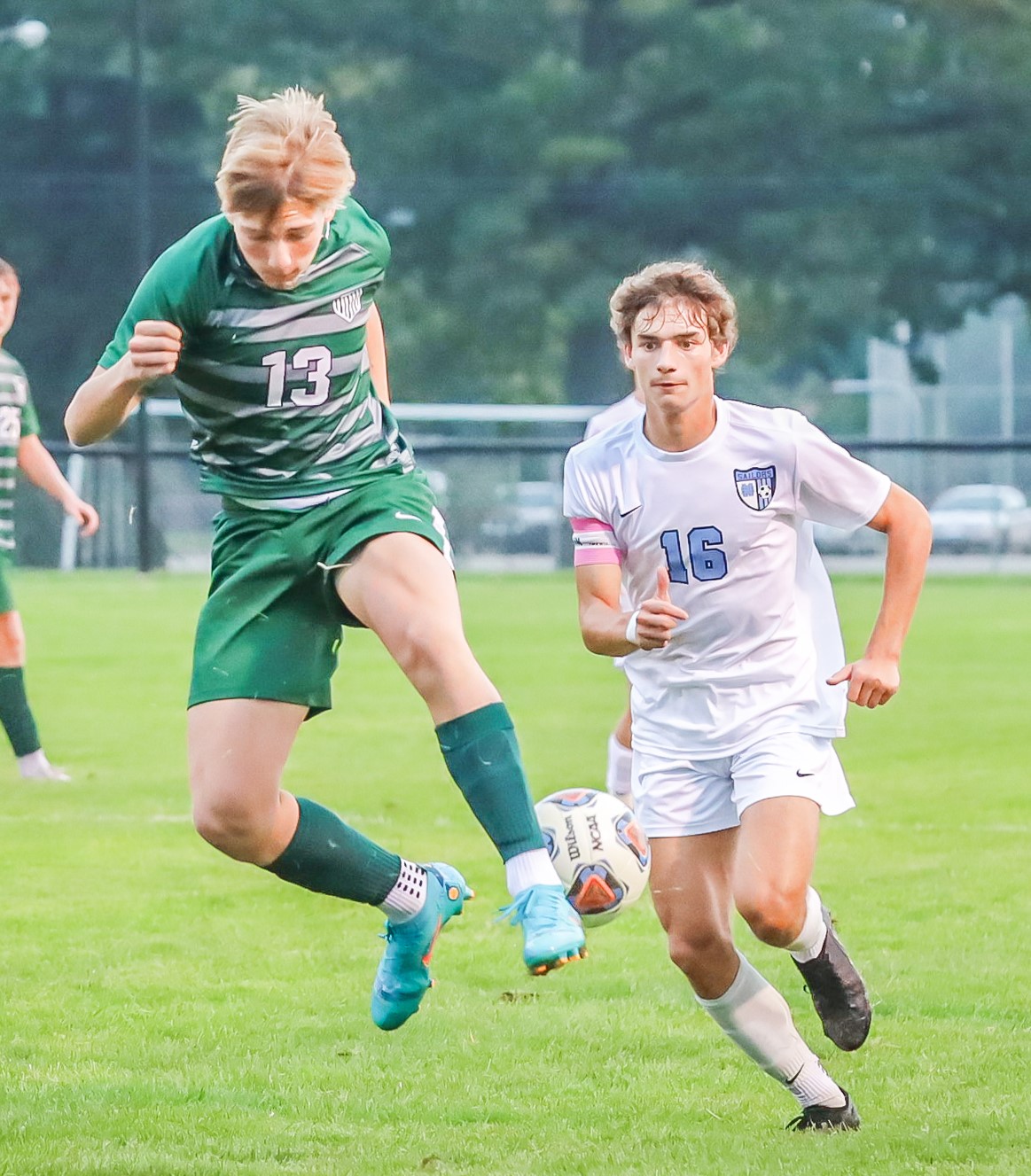 Reeths-Puffer’s Owen Ritsema (13) and Mona Shores’ Easton Lopez both try to get control of the ball. Photo/Joe Lane

The Sailors improved to 9-1-2 overall and 6-0 in O-K Green play. They can wrap up the regular season conference title with a victory over last place Muskegon later this week.

“It’s wonderful,” said Mona Shores coach Bill Moulatsiotis, whose team captured the Causeway Cup, a new trophy that goes to the winner of the annual Mona Shores-Reeths-Puffer game. “We have great senior leadership, and the guys have been playing great defense all season.

“We faced wave after wave of Reeths-Puffer attack. We were back on our heels most of the first half, and we bent a little but we did not break.”

While Moulatsiotis was happy with the victory, he said his team still has some improving to do and lot of games to win before reaching its goal. 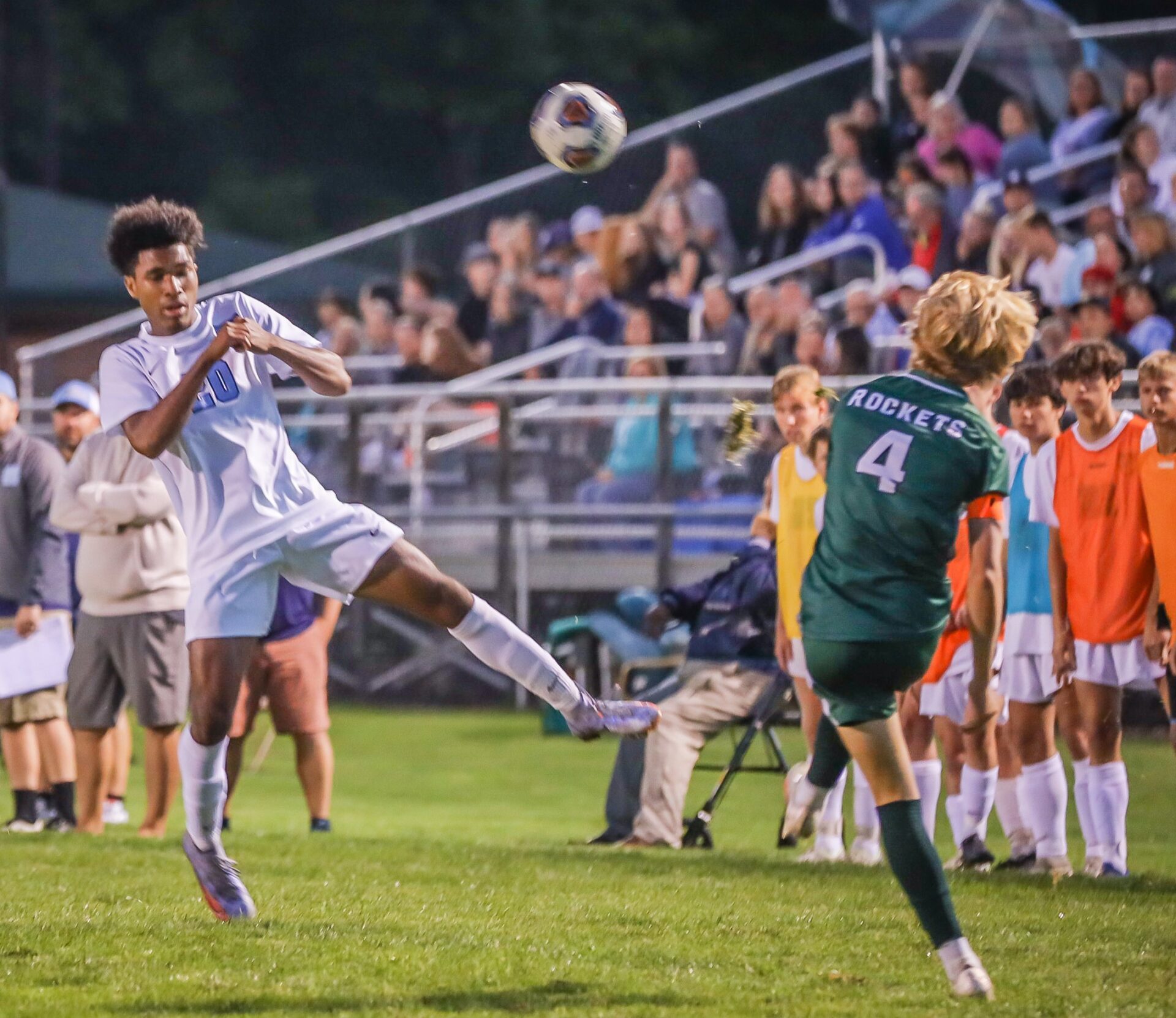 “Reeths-Puffer is a quality team, Coach Kody (Harrell) had them well prepared, and we survived by the skin of our teeth,” the coach said. “We’re happy with that, but we have to do better. We still have to fix some things.

“Our eyes have been on districts all year. To be honest, all of this will be for nothing if we don’t win districts. That’s our goal.”

The Sailors looked like they might take control early when Dan VanderPloeg scored on a long shot less than two minutes into the game.

But that early goal proved to be a wake-up called for Reeths-Puffer, and the Rockets went on the offensive for the rest of the first half.

R-P controlled the ball, kept the play largely in the Sailors’ zone and had a 6-3 advantage in shots on goal.

Rocket standout Liam Smith finally cashed in with 9:42 left in the half when he was tripped entering the Mona Shores goal box, earned a penalty kick and easily placed it past Mona Shores goalie Gavin Stoker, making the score 1-1.

The Sailors started coming back to life just before halftime, and nearly took the lead when a shot hit the post of the R-P goal with three minutes left, and another hit the crossbar with one minute remaining.

The Rockets dodged those bullets and the score remained deadlocked at halftime.

The second half was a wide-open affair, with both teams having good scoring chances. The Sailors had a 4-3 edge in second half shots.

Mona Shores’ Connor Forman scored the winning goal when he kicked in a rebound of a blocked shot with 22:53 left in the contest.

The Sailors had two more great chances to score when the Rocket net was wide open, but R-P defender James Fansler stood in for the goalie and made two great saves, including one on a header, to keep the score close.

Mona Shores also had a shot hit the crossbar of the R-P goal again late in the game.

Reeths-Puffer coach Kody Harrell said he was pleased with the way his team performed after falling behind early.

“We’re not here for moral victories, but that’s a very good team with a very good coach, and I was proud of our effort, especially after they scored in the first two minutes,” said Harrell, whose team is now 5-5-2 overall and 2-3-1 in the O-K Green,

“You definitely got the sense that they thought, OK, we got our goal, and they might have assumed we weren’t going to score, and our boys played aggressive. We were the team that had nothing to lose.”

Harrell said his team has done some soul-searching lately and is ready to move ahead after some disappointing outcomes.

The Rockets returned 16 players this year from a team that won the O-K Green conference tournament last year, and the coach said he might have been guilty of pushing his players too hard to win the conference this fall.

“I’ve kind of learned my lesson,” he said. “I may have forced that too much. But we’re Reeths-Puffer, and we still have all sorts of things we can achieve.”