Fruitport has scored nine touchdowns of more than 50 yards, which means the Trojans in the trenches are opening holes and protecting the passer

FRUITPORT – We’ve all seen it a million times.

A football team will make a big play on a long run or pass, everyone will cheer for the running back, quarterback or receiver, and those guys will get the headlines after the game.

But it’s often the offensive line that deserves much of the credit for the most exciting plays.

At Fruitport, there’s no shortage of those types of plays. The Trojans have put up points by the boatload this season, running up scores of 30, 42, 50 and 46 in their first four games.

Of course Fruitport has some explosive skill players on offense, like Pashcal Jolman, Collin Jolman and Cody Nash, but the big point totals mean the O-line is pretty explosive, too.

“Much improved,” said Fruitport head coach Nate Smith about the performance of his line so far this season. “It’s really the same group of guys we had last year. They did the work in the weight room this offseason and really worked on speed and technique. It’s shown with how they’ve played.”

The Trojans have had nine plays this season result in touchdowns of more than 50 yards, and the linemen love it when that happens, even when they don’t get the cheers.

One reason they mesh so well together is because most of them have played together for years.

“We’re very close,” Bell said about the linemen. “Four of us have been on the same line since elementary and it’s pretty special.”

One benefit of their close ties is that the guys on the line don’t have to be shy about calling each other out.

Smith says a strong offensive line is crucial, and without it any football team will struggle.

“It’s the heartbeat,” the coach said. “If you don’t have a good offensive line, you really won’t move forward. You can get by with skill guys a bit, but I’ve coached teams that have won 7-on-7’s, then you get to the season and nothing much is happening.

“It’s a thankless job, but I think in recent years people have started to put more light on the offensive line. It’s the heart of what we’re trying to do.”

While offensive linemen often get the reputation of being big and nasty, that isn’t the case with the Trojan line.

They’re only nasty on the field when they have to be, according to the coach. 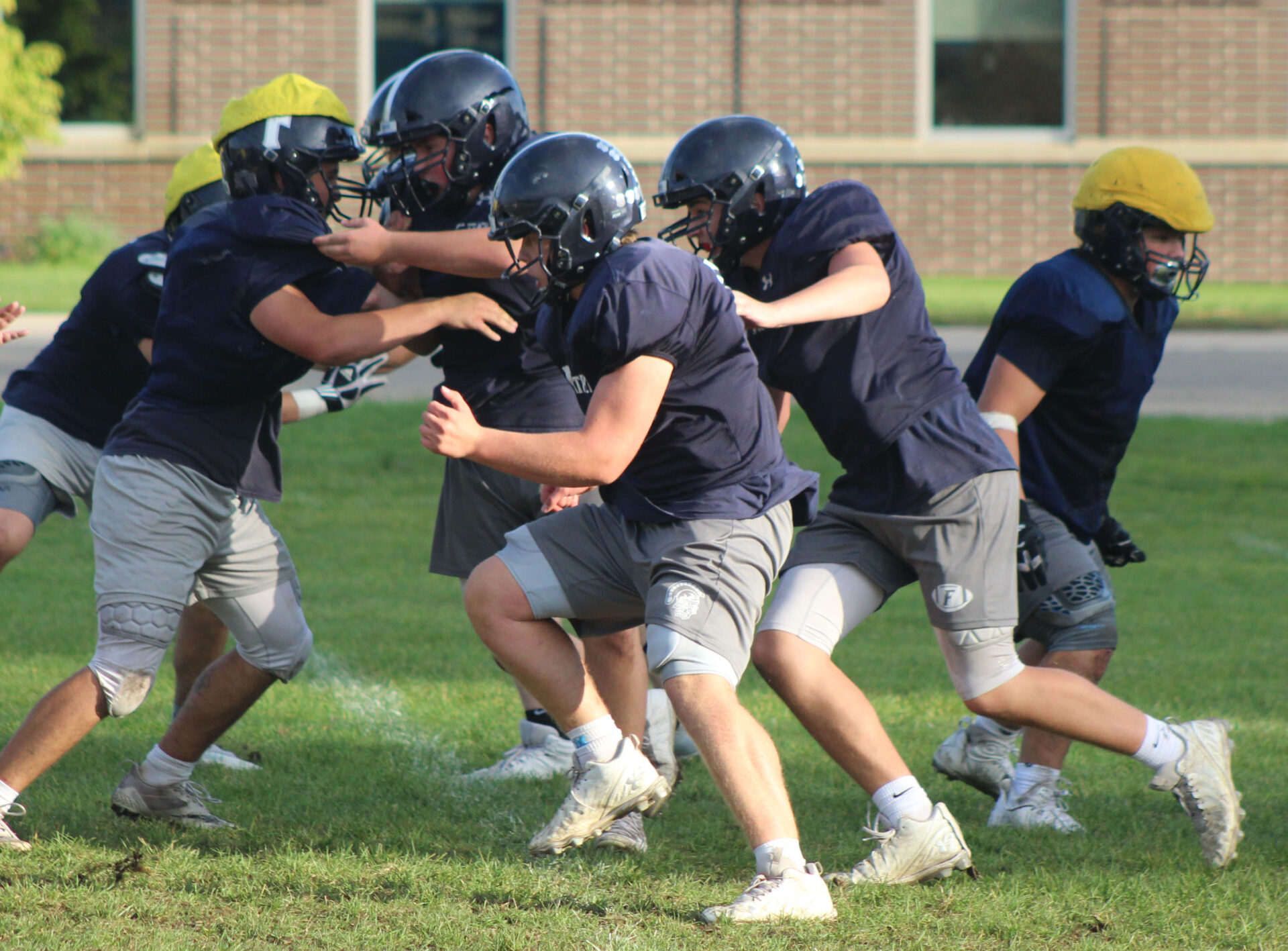 The Trojan O-line gets a big push during practice.

The Trojans are currently 2-2 and hope to get back to winning after a disappointing loss to Hudsonville Unity Christian last week. Fruitport will host Coopersville in its first home game of the season on Friday on its freshly installed artificial turf field.

Wiggins believes the team can still accomplish great things, but either way he’s happy to be playing with his friends up front.

“I think it’s a special season because I’ve always been playing with these guys,” he said. “I think we can still do a lot.”